With great sadness, Kansas City Disc Golf regrets to inform you that one of the forefathers of disc golf in Kansas City, Dr. Jim “Ace” Mason passed away on June 12th, 2022, at his home in Wichita, Kansas. Ace was born July 5, 1948, in Topeka, Kansas. He was 73 years old. He is survived by three brothers—Edward, Lon, and Dan, daughter April, grandson Dillon, three nieces, two nephews, and six great-nephews. He was preceded in death by his mother Martha Mason and father Martin Hazlett. 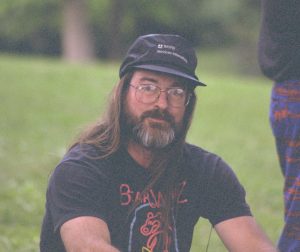 Dr. Jim “Ace” Mason created his own path in life, and many followed. Christopher Walken once said, “You cannot improvise unless you know exactly what you’re doing.” He always fancied himself a doctor of neuroscience. The story of how he became “Dr.” Ace Mason goes back to one of the early Louisville Disc Derby events in Kentucky in the early 1980s. A television reporter and crew were on hand to cover the event. They approached a group of guys that included Ace and asked what each of them did for a living. Several of that group would go on to have very successful, professional careers. So Al Ballew said, “I’m a lawyer.” Rick Shaffer said, “I’m a rocket scientist.” There might have been an engineer or MD who answered before he got to Ace. Ted Smethers recalls how Ace related what he was thinking when he was queried. It was something like “Oh sh#@! These guys are all professionals, and I’m just a Frisbee player. What am I going to say?” Ace went with what seemed to be appropriate at the time and answered, “I’m a brain surgeon.” To the delight of the interviewees and the other players, the story aired on the local TV station that evening. He started to sign his discs that way. He may not have had a degree, but his closest friends let him get away with it, as long as there were no sharp objects involved. As Ace would say, “When the legend becomes fact, print the legend.” 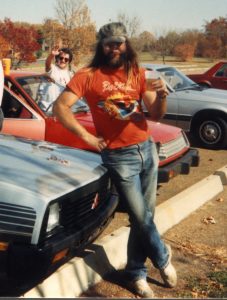 In the 70s Ace would meet up with friends at Gillham Park in Kansas City, where they would play rounds of disc golf on an object course. There was another  group around that same time that set up and played an object course in Antioch Park in Overland Park. These two groups, who had little-to-no idea about each other, would eventually converge on what was known as the first disc golf tournament in KC at Hal Kurz’s father’s warehouse called Century Labs. It was a course completely designed inside and throughout the warehouse using 50-gallon drums for trees and poles for targets. There were also freestyle, guts, and other frisbee competitions. At that juncture, Kansas City’s frisbee community was born.

In 1983, he helped create the first Kansas City Wide Open. It was called the Wide Open because, as Ace would say, “If you can fling it, bring it.” He took running the KCWO very seriously and wanted it to be a special event. He was so engrossed in creating a program for the event he had to recruit some of his closest friends to help out. As Mark Stiles recalls, “It was one hell of a program.” He was also instrumental in producing and mailing the first PDGA newsletter from his Kansas City home. 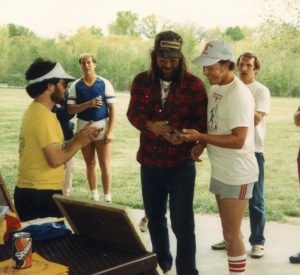 Ace, along with Duane “CD” Steiner, helped shape disc golf in Kansas City, taking the remnants of several disc clubs like D.I.S.C. (Disc International Sports Club), and others, to form the Kansas City Flying Disc Club in 1986-1987, which later morphed into the Kansas City Disc Golf organization. Around that same time, with help from many friends, he created Rosedale Park Disc Golf Course. Ace, along with Jim Kreeger and Barry Martin, designed and installed Waterworks Disc Golf Course, and had the grand vision that became Blue Valley DGC. He also spent many hours with Kevin Montgomery and others on the design of WYCO. He would always urge them to use “The Rule of Threes”: three lefty holes, three righty holes, and three straight ones. 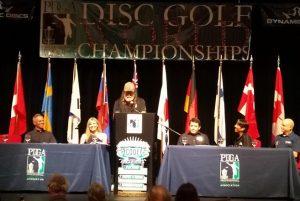 In 2016, Ace was inducted into the Disc Golf Hall of Fame. From all accounts, his speech at that awards ceremony was epic and indicative of the type of speaker he was. In 2002, during the 20th Annual KCWO players’ meeting, he was asked to give a speech. It wasn’t a normal speech, rather he recited the lyrics to “Louie, Louie” in his deep, melodic voice, reminiscent of Eeyore. When he was done, he simply set the mic down and went back to his seat, leaving the audience confused and lost. He was great at telling stories. He always had a way of building each one up to the proper tempo so that it would end just right, leaving those listening to either burst into laughter or walk away scratching their head. There may even have been a life lesson in there for those who chose to listen.

His philosophy on life was to be extremely inclusive. He used disc sports as a forum to bring people together and to enjoy; not to drive revenue or agendas. It didn’t matter where you lived, what you believed, or whom you voted for. If you had a disc and enjoyed throwing it in any of the frisbee sports, you were part of the family. 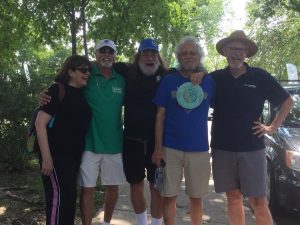 So many people were introduced to disc golf by Ace. If you were around in the 80s, you probably bought a disc from Ace out of the back of his old station wagon. He is said to have had one of the most amazing collection of frisbees for that time. Some people have referred to it as a frisbee museum. He created so much joy and happiness in so many people’s lives. His vision and passion for disc sports helped make Kansas City disc golf what it is today.

This year we celebrate the 40th Kansas City Wide Open, an event that Ace would never miss, traveling from his home in Wichita annually. Sadly, his physical presence will be missed, but we’re sure his soul will be flying high among the trees as he watches over the tournament he helped create, being played on a course he helped design, with the frisbee family he helped introduce to this wonderful game.

We leave you with this poem, written by the late Dr. Ace Mason… 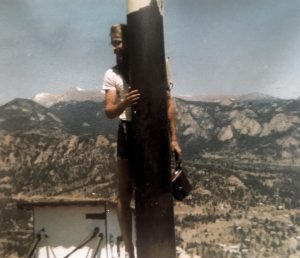 The wind is my ally; I did not want. It maketh me to roll down into green pastures: it bloweth me into deep waters. It destroyeth the hole.

Yea, though I throw across the valley of death, I will make no eagle: for it art at me; its gusts & its wrath they buffet me.

It preparest a double-bogey before me for the entertainment of mine competitors; my score runneth over.

Surly woodness & cursing shall be with me for all the rounds of my life: and I will swell at the score forever.

By Dick Parker and Rick Rothstein