Thank you to everyone who came out to support Kansas City Disc Golf this weekend at the 2022 Club Championships. We had 120+ people register for the event, and we dragged 60+ players out for all three rounds of competition.

David Potts became a 2nd time club champion from the chase card by shooting the hot round at Water Works on Sunday with a 7-under par 49. Potts bogeyed the first hole, and then played clean for the rest of the round in blustery conditions. There were 4 former champions in competition in the Championship Flight — Potts, John Jones (2021), CD Steiner (2015) and Fred Smith (2007). Fred and CD were tied for the lead going into Sunday’s final round with Jones only one stroke back. Wes Pickman rounded out the lead card. Jones finished in 2nd; while CD and Fred finished in a tie for 3rd with Michael Babbitt.

Casey Pennington led wire-to-wire on the women’s side, capping it off with an impressive even par round at Water Works on Sunday afternoon that included 4 birdies. Casey finished 1-under par for the event, with Anna Hare and Ava Meyer rounding off the podium. 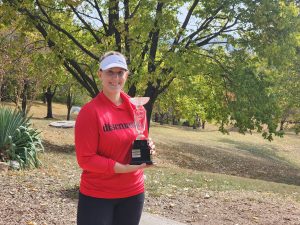 Complete details of all of the flight winners and bag tag number are attached to this post as a downloadable .pdf. Expect an announcement in the next few days regarding when and where you can pick up flight championship trophies and 2023 bag tags.